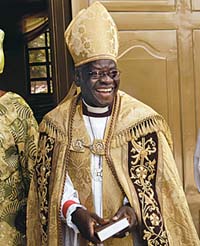 The latest efforts by the U.S. Episcopal Church to calm tensions over the consecration of gay bishops – warning that global Anglican-Episcopalian family could split – has been rejected by Nigerian Archbishop Peter Akinola.

Akinola, a vocal and influential leader of the faction seeking an outright ban on gay bishops, said a resolution this week by the U.S. Episcopalians that failed to explicitly bar gay bishops from the pulpit meant his followers' "pleas have once again been ignored."

"Instead of the change of heart (repentance) that we sought what we have been offered is merely a temporary adjustment," Akinola said in a statement posted on his church's Web site late Wednesday.

Akinola said church leaders would have to meet to coordinate their response, and he made no mention of a formal separation in his statement.

Anglican leaders had set a Sunday deadline for the Episcopal Church, which is the Anglican body in the U.S., to pledge unequivocally not to consecrate another gay bishop or approve an official prayer service for same-sex couples.

On Tuesday, U.S. Episcopal Church bishops affirmed a resolution passed last year by the Episcopal General Convention that urged bishops to "exercise restraint" by not consenting to a candidate for bishop "whose manner of life presents a challenge" to Anglicans and the church.

The promise, however, falls short of an outright ban. The Episcopal leaders also promised they would not approve official prayers to bless same-gender couples.

Akinola, who has arranged and oversees breakaway Episcopal congregations in the United States said, said that wasn't enough.

"It was our expressed desire to provide one final opportunity for an unequivocal assurance from The Episcopal Church of their commitment to the mind and teaching of the Communion," Akinola wrote.

"We also made clear that it is a time for clarity and a rejection of what hitherto has been endless series of ambiguous and misleading statements. Sadly it seems that our hopes were not well founded and our pleas have once again been ignored."

The gay issue has been divisive within the church as a whole and within the American church. Four of the 110 Episcopal dioceses are taking steps to split off from the national church and align with an overseas Anglican church.

Anglican leaders from Nigeria, Rwanda, Kenya, Uganda and elsewhere have violated Anglican tradition that they minister only within their own provinces and have consecrated bishops to oversee breakaway Episcopal congregations in the United States.

In their statement Tuesday, U.S. bishops said they "deplore" the incursions and "call for them to end."

Akinola, a traditionalist who's a leader among developing-world clergy who treat the Bible's words more literally than others, set up the Convocation of Anglicans in North America in 2005.

Akinola administers his convocation from Nigeria, where homosexuality is deeply taboo and considered by many to be out of step with African practices. Such beliefs are common across Africa.

"This attitude towards the Word of God and the requests of the Communion is at odds with the Spirit of the One we serve. The Unity that Christ commands can only be found in obedience to the Truth revealed in the Holy Scriptures and mutual submission to one another," he wrote.

"The Gospel message of freedom, justice and dignity for all persons can only be found in heartfelt repentance and joyful obedience to the Truth."