President of Sierra Leone threatens to impose state of emergency

The president of Sierra Leone Ahmad Tejan Kabbah has threatened to impose a state of emergency if election violence between rival parties does not stop. 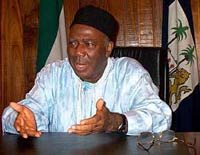 President of Sierra Leone threatens to impose state of emergency

Speaking in a radio and television address late Monday, President Ahmed Tejan Kabbah warned his government would "deal firmly and promptly with anyone bent on unleashing mayhem on our country."

Police used tear gas to disperse rock-throwing ruling-party and opposition supporters who clashed Sunday in the capital, Freetown. On Monday, authorities imposed a dusk-to-dawn curfew in the eastern diamond mining town of Kono after similar clashes there.

No fatalities have been reported.

The presidential vote was Sierra Leone's first since U.N. peacekeepers withdrew two years ago and has been seen as chance for the diamond-rich nation to prove it has established civilian rule after a 10-year civil war that ended in 2002.

Seven candidates had vied to succeed Kabbah, who is prevented by term limits from running for a third five-year term.

"These acts of provocation must stop now. Government will employ all legal and constitutional measures necessary in order to preserve and maintain law and order throughout the country," Kabbah said. "Henceforth, government shall not hesitate one moment to declare a state of public emergency if the current state of intimidation, molestation and violent acts is not stopped."

A state of emergency would have to be ratified by a two-thirds majority of parliament within 14 days.

The Aug. 11 vote also gave the opposition control of the legislature, with 59 out of 112 parliamentary seats, compared with 38 for the ruling party, according to the country's election commission.