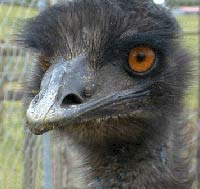 A manager fed the emu grapes and apples in an attempt to calm the bird inside the makeshift enclosure.

Richard Takacs, the owner of 3-year-old Myron, speculated the bird had been chased from his nearby farm by a coyote.

Emus cannot fly, but Takacs said he was not surprised when police contacted him from the store, about two miles (three kilometers) north of his Meadowbrook Market and Pumpkin Farm.

"They can run 40 miles (65 kilometers) an hour, so that was just a quick sprint for Myron," Takacs said.

Two other emus from the farm also bolted from their pen but were found unharmed in a nearby pumpkin field.

Takacs retrieved the apparently frightened Myron from the 24-hour Wal-Mart and placed the bird by itself in a pasture so it could feel safe and relax.

West Bend is in southeastern Wisconsin, about 35 miles (56 kilometers) northwest of Milwaukee.