Hurricane Dean left Jamaica with roofless houses, downed power lines, shredded trees and minor flooding on Monday. Islanders were thankful they were spared utter devastation from Hurricane Dean, whose powerful core shifted course away from the island at the last minute. 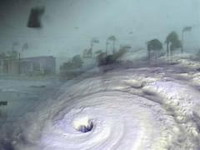 "We know how much God loves us, because it could have been worse," radio announcer Betty Ann Blaine said on her call-in show on Jamaica's Nationwide Radio.

Police said the storm caused two deaths on Sunday: an elderly man who was killed when his house collapsed in the hills of St. Andrew parish and a man who was struck by flying debris in Trelawny parish.

An unknown number of roofs were ripped from houses, trees and utility poles were toppled and roads were left impassable by floodwaters and debris. The government said Monday it was still collecting damage reports from across the country and an official tally was not yet available.

The Jamaica Tourist Board reported minimal damage to the north coast, which contains many resorts, and said the airport in Montego Bay was open for emergency flights. Both the Kingston and Montego Bay airports were expected to reopen for commercial flights later in the day, the board said.

It could have been much worse. Forecasters had warned Dean could make a direct hit on Sunday, tearing across the length of Jamaica with winds of up to 145 mph (235 kph) and drenching it with up to 20 inches (50 centimeters) of rain. At the last minute, however, Dean turned to the south and the fiercest winds stayed out in the Caribbean.

Business owners in the capital of Kingston on Monday peeled back plywood covers from their storefronts. The energy minister said the country's Petrojam refinery was not damaged by the storm.

Dean's southerly shift also spared the Cayman Islands, farther west, which forecasters had predicted days ago would receive the full brunt of the Category 4 hurricane. But winds gusts grew no greater than 60 mph (95 kph) on the British territory Sunday night as the storm knocked down trees and caused minor flooding. There were no reports of casualties.

"We're particularly thankful that we did not feel the full force of it," Cayman Islands Gov. Stuart Jack said Monday.

Tourism Minister Charles Clifford said the airport will reopen for visitors Tuesday and the tourism sector will be fully operable by the end of the week.