A python smuggled into the Budapest Zoo has killed three rare Kea parrots. 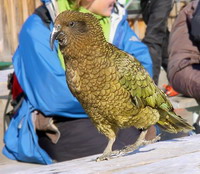 It was unclear whether a visitor released the tiger python into the Keas' cage or whether someone released the 2-meter-long (6-feet-6-inch) snake elsewhere in the zoo and it found the cage by itself, zoo spokesman Zoltan Hanga said.

Hanga said the zoo owned several pythons, but they had implanted microchips and all had been accounted for.

The Kea is a sharp-beaked parrot native to the high country of New Zealand's South Island. It is considered a vulnerable species - an estimated 1,000-5,000 survive in the wild and another 140 in zoos.

The Keas - a female and two males - were very playful birds and came to Budapest from zoos in Austria and Germany. They were each valued at US$7,800 (5,800 EUR).

The zoo reported the incident to the police in the hope of finding the python's owner.

"Clearly the python is not to blame," Hanga said. "It only did what came naturally. Its owner should be held responsible."

If the owner is not found, the python likely will remain in the zoo, Hanga added.