NASA specialists decided does not need to be repaired shuttle Endeavour's belly in orbit. After a five-hour meeting of mission managers they decided against any risky spacewalk repairs based on the overwhelming - but not unanimous - recommendations of hundreds of engineers. 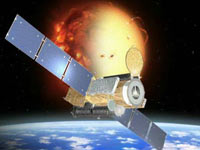 For several days, NASA had said crew safety was not at risk. The concern was that the heat of re-entry could weaken the shuttle's aluminum frame at the damaged spot and result in lengthy post-flight repairs, but testing showed that would not be the case.

Ultimately, managers decided they could not justify putting spacewalking astronauts at risk if the vehicle was in acceptable shape to make the journey home. A spacewalk earlier this week, cut short by an astronaut's ripped glove, showed how hazardous even a relatively routine jaunt outside the international space station can be.

"I am 100 percent comfortable that the work that has been done has accurately characterized it (the damage) and that we will have a very successful re-entry," said John Shannon, chairman of the mission management team. "I am also 100 percent confident that if we would have gotten a different answer and found out that this was something that was going to endanger the lives of the crew, that we had the capability on board to go and repair it and then have a successful entry."

Johnson Space Center's engineering group in Houston wanted to proceed with the repairs. But everyone else, including safety officials, voted to skip them.

The thermal shielding on Endeavour's belly was pierced by a piece of debris that broke off the external fuel tank shortly after liftoff Aug. 8. The debris, either foam insulation, ice or a combination of both, weighed just one-third of an ounce (10 grams) but packed enough punch to carve out a 3Ѕ-inch (8-centimeter) -long, 2-inch (5-centimeter) -wide gouge and dig all the way through the thermal tiles. Left completely exposed was a narrow 1-inch (2.5-centimeter) strip of the overlying felt fabric, the last barrier before the shuttle's aluminum structure.

The only way to fix the gouge would have been to send a pair of spacewalkers out with black protective paint and caulk-like goo, and maneuver them beneath the shuttle on the end of a 100-foot (30-meter) robotic arm and extension boom, with few if any close-up camera views of the work.

The crew had spent much of Thursday running through the never-before-attempted repair methods, just in case they were ordered. Crew members were informed of the decision not to make repairs before they went to sleep on Thursday.