Climbing Mount Everest after 60 can be fatal

According to a study, climbers over 60 are three times more likely than the average mountaineer to die on Mount Everest. 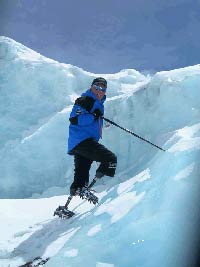 Climbing Mount Everest after 60 can be fatal

"Before we did this analysis, we didn't know whether age would be important. Younger climbers have a physical advantage, but probably have less experience than older climbers," said University of Washington Prof. Raymond Huey, one of the study's authors.

"We used to refer to this advantage of age as the 'Kareem Abdul-Jabbar effect,' he said, referring to a U.S. basketball star. "As he got older, his physical skills declined but he was so smart and experienced that he was able to compensate and still play professional basketball at the highest levels."

"Unfortunately for older climbers, that effect does not apply on the world's highest mountain," Huey said.

In contrast, Huey said there was very little difference between men and women's chances of summiting Everest or dying on the mountain.

The study met with skepticism among the mountaineering community in Nepal's capital, Katmandu, where many climbers gather before attempting Everest.