Consumer watchdogs and health experts tried to ease fears and prevent panic Tuesday in the wake of the second recall of Chinese-made toys in less than two weeks - this one more massive than the first. 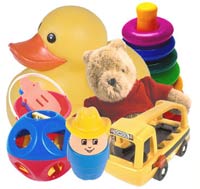 The world's leading toymaker, Mattel Inc., announced Tuesday that it was recalling 436,000 die-cast vehicles featuring the Sarge character from the movie "Cars" because of lead paint, a week after the company's Fisher-Price unit recalled 83 types of toys that also contained excessive levels of lead paint.

In addition, the company recalled 18.2 million toys - including popular items such as Barbie, Batman and Polly Pocket - that contain magnets that can become detached and be swallowed by children. The toys were made in China , where 80 percent of the toys that come into the U.S. are produced, Denver Post reports.

According to Reuters, the U.S. Centers for Disease Control and Prevention said about 310,000 U.S. children ages 1 to 5 have high levels of the toxin in their blood. It said the major source of lead exposure among children is lead-based paint and lead-contaminated dust in deteriorating buildings, not ingesting paint from toys.

CDC officials urged parents worried that their children may have ingested lead paint on toys to get them tested for lead levels in their blood.

"There is no acceptable level of lead exposure for a child," CDC spokeswoman Bernadette Burden said on Tuesday.

"If the parent is concerned, we encourage them to have their child screened for lead exposure."

Lead is more dangerous to children than adults because it can harm the developing brain, causing reduced IQ, learning disabilities and behavioral problems, among other things.