Junichiro Koizumi, who stepped down last September after being Japan 's third-longest serving post-war prime minister, visited Yasukuni Shrine, which is viewed by some countries as a symbol of Japanese military aggression. 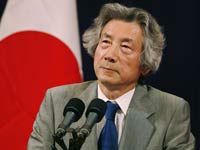 Koizumi, 65, visited the shrine in central Tokyo, which includes war criminals among the dead it honors, at about 8:15 a.m., Yasukuni's press office said. A Cabinet minister also visited today, the anniversary of Japan 's surrender at the end of World War II.

China and South Korea cut off high-level contacts because of Koizumi's annual visits to Yasukuni, saying they showed Japan hasn't fully atoned for its militarist past. His successor, Shinzo Abe, traveled to China in October last year after taking office and reached a consensus on the issue, according to the Chinese government, Bloomberg reports.

However, his visit is unlikely to stir sharp protests from China and other Asian neighbors that were victims of Japan ' wartime atrocities because nearly one year has passed since he stepped down as prime minister.

Koizumi visited the shrine on Aug. 15 last year while he was still in office, drawing sharp protests from Asian neighbors.

Yasukuni Shrine is controversial because Class-A war criminals are enshrined there along with the war dead. Moreover, critics have pointed out that visits to the shrine by prime ministers constitute a violation of the Constitution that provides for separation of religion and state, Mainichi Daily News informs.