At least 19 U.S. soldiers die in Iraq in first week of August

Military officials said Tuesday four more American and one British soldiers were killed, which can possibly mean that extremists are regrouping after a drop in U.S. troops deaths last month. 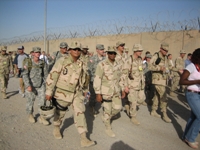 At least 19 U.S. soldiers die in Iraq in first week of August

The spate of recent U.S. deaths - 19 so far in August - seems certain to intensify the debate over U.S. progress at calming violence, ahead of a key September report to Congress.

U.S. deaths had dropped slightly in July to 79 - the lowest monthly number since 70 were killed in November. Before July, more than 100 American forces died each month in the April-to-June period as the U.S. military struck out at insurgents on dangerous streets and cities across Iraq.

But U.S. commanders say rogue Shiite militias have stepped into the gap left as Sunni insurgents have been pushed back, and are now responsible for most attacks on Americans in Baghdad and districts around it.

The rise in deaths comes as the overall number of U.S. troops in Iraq has temporarily peaked at its highest ever - nearly 162,000 - as new units arrive to replace those on the way out, the Pentagon said.

U.S. officials also have warned that militants might try for spectacular attacks before the September report.

Leery of that, Baghdad officials tightened checkpoints and announced plans for curfews and vehicle bans ahead of a mass Shiite religious march planned in the capital later this week. Thousands of Shiite pilgrims - women shrouded in black cloaks and men in traditional white Arab robes - began walking from the country's south and gathering from elsewhere for the march.

Shiite pilgrimages often have been the target of devastating attacks by Sunni insurgents. But some of the devout, like Sami Faraj, a 52-year-old government employee, said they would march nevertheless.

"We do not care about the bombings and the terrorists. We are ready to sacrifice ourselves for the cause and for the sake of the prophet's descendants," said Faraj. He planned to set out with his wife and children from the central Baghdad neighborhood of Karradah to an important Shiite shrine in the northern area of Kazimiyah - at the heart of the pilgrimage - on Wednesday.

The showing of Shiite strength finds Iraq in the middle of a severe political crisis. Iraqi Prime Minister Nouri al-Maliki faced new defections from mostly Sunni politicians this week in his unity government.

But al-Maliki, on a state visit to Turkey, dismissed the mounting criticism of his leadership.

"This will not affect the government," he told The Associated Press in an interview aboard the plane en route to Ankara.

The political crisis has halted any efforts at progress on key benchmarks the United States sought before the September report, including laws to share oil revenue and reform police and security services.

Further fractures emerged as Iraq's semiautonomous Kurdish government approved a regional oil law that paves the way for foreign investment in northern oil and gas fields even as the national oil law remains in limbo.

A hardline Sunni group immediately criticized the move. Sunnis worry they will lose out on Iraq's oil wealth given the current government coalition dominated by Shiites and Kurds.

Despite those political troubles back home, al-Maliki appeared to make some progress at calming another storm - Turkey's anger over attacks by Kurdish militants in northern Iraq across the border into Turkey.

Al-Maliki said Iraq's interior minister soon would travel to Turkey to head an effort to find practical ways to prevent the attacks. Turkish Prime Minister Recep Tayyip Erdogan called the leaders' talks "useful and fruitful" and said they had led to progress on security issues.

American attention, though, seemed likely to focus on the troop deaths.

One soldier also was killed and another wounded Monday when their vehicle was targeted by an armor-piercing explosively formed penetrator, or EFP, in a western section of the capital, according to a separate statement.

The British soldier died from injuries sustained in a gunbattle Monday in the southern city of Basra, the British Ministry of Defense said.

During the Baghdad curfew, all cars, trucks, motorcycles and carts will be banned from moving in city streets from 10 p.m. Wednesday until 5 a.m. Saturday, said Brig. Gen. Qassim al-Moussawi, a military spokesman for Baghdad.

The ban would begin at 10 p.m. Tuesday in the Kazimiyah district, where Iraqi security forces already were deployed in force, he added.

Speaking of Sunni extremists, he said: "We have information that Takfiri and terrorist groups will try to disturb this occasion. "