Italy's transport minister met with aviation officials Tuesday after days of baggage-handling chaos at Rome's main airport at the peak of holiday season. 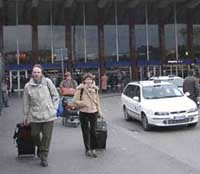 Thousands of bags have not been put on correct aircraft, and for several days passengers had long waits to claim their baggage at the Leonardo da Vinci airport. Newspapers have for days been filled with reports of angry travelers.

However, the ANSA news agency and airport officials said the situation was returning to normal. The meeting in Rome was between Transport Minister Alessandro Bianchi and the heads of the ENAC civil aviation authority and of Aeroporti di Roma, which operates the airport.

ENAC sent a team of inspectors to the airport on Monday, and called for a full investigation into the disruptions. Baggage handling is operated by outside companies.

Leonardo da Vinci is currently at its busiest, with some 110,000 passengers passing through the airport each day.