On U.S. vacation, Sarkozy lashes out in French at 2 news photographers

French President Nicolas Sarkozy lost his temper with two American news photographers covering his vacation, jumping onto their boat and scolding them loudly in French. 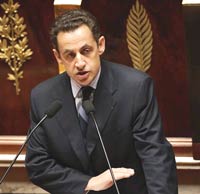 On U.S. vacation, Sarkozy lashes out in French at 2 news photographers

Sarkozy and companions were headed for open water Sunday in a boat on Lake Winnipesaukee when he spotted Associated Press photographer Jim Cole and freelancer Vince DeWitt aboard Cole's boat, which was outside a buoy barrier monitored by the New Hampshire Marine Patrol.

Before Sarkozy spotted him, Cole had driven his boat up to the patrol boat, identified himself and received permission to be there.

"He was happy and smiling and he waved at the security people as he was coming out," Cole said of the president. "And then he noticed us taking pictures and his happy demeanor diminished immediately."

The men said they watched through their lenses as Sarkozy pointed toward them and his boat began moving in their direction. Coming alongside Cole's boat, Sarkozy, clad only in swim trunks, jumped aboard and began shouting at them.

Both men said they repeatedly stated they did not speak French. Cole said he asked whether any of the other passengers on Sarkozy's boat spoke English, but that no one answered or intervened.

Sarkozy picked up DeWitt's camera but then put it down. A woman then spoke up in English and relayed Sarkozy's request to be left alone, DeWitt said. The woman did not identify herself.

Hours earlier, Sarkozy had spoken to reporters and said in French, "I am naturally ready to answer all your questions, and maybe afterward you will resume covering the news and other topics, and leave me tranquilly with my family." An AP reporter taped Sarkozy's remarks and had them translated, but the photographers did not hear the translation until after the altercation.

After Cole and DeWitt promised to stop shooting photos for the day, Sarkozy calmed down, reboarded his boat and continued out onto the lake with his party, followed by a boat carrying U.S. Secret Service agents.

The French government in Paris had no immediate comment.

Sarkozy and his family have been vacationing at a lakefront estate owned by former Microsoft Corp. executive Michael Appe. The president was previously photographed relaxing dockside in his swim trunks.