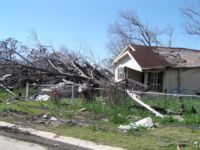 "This event was excluded from coverage under the plaintiffs' insurance policies, and under Louisiana law, we are bound to enforce the unambiguous terms of their insurance contracts as written," Judge Carolyn King wrote for a three-judge panel of the 5th U.S. Circuit Court of Appeals.

"Accordingly, we conclude that the plaintiffs are not entitled to recover under their policies," she wrote.

The panel overturned a November decision by a lower court judge that argued that language excluding water damage from some of their insurance policies was ambiguous.