A tropical depression gained speed early Tuesday off the East Coast of the United States between Bermuda and Massachusetts and was expected to briefly become a tropical storm. 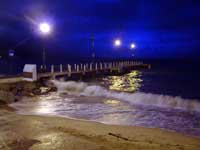 The third depression of the season was expected to grow stronger but "as a tropical system it has a very short life ahead of it," said James Franklin, a senior hurricane specialist with the National Hurricane Center.

The depression would be named Chantal if it reaches tropical storm strength, with winds of at least 39 mph (63 kph).