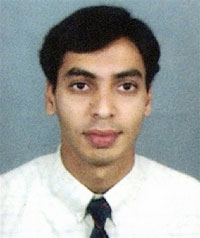 Prosecutors withdrew the charge against Mohamed Haneef in the Brisbane Magistrates Court after a review of the evidence by the federal Director of Public Prosecutions Damian Bugg found two major errors in the case.

"In my view, there is insufficient evidence to establish the elements of the offense," Bugg told reporters in Canberra, adding that he was satisfied there was "no reasonable prospect of conviction."

"On my view of the matter, a mistake has been made," he said.

Haneef, 27, had been charged with providing reckless support to a terrorist organization because he gave his mobile phone SIM card to his second cousin, Sabeel Ahmed, in July last year.

He had faced up to 15 years in prison if convicted.

British police have charged Ahmed, 26, with withholding information that could prevent an act of terrorism. His brother, Kafeel Ahmed, is believed to have set himself ablaze after crashing into Glasgow Airport and remains in a Scottish hospital with critical burns.

In Brisbane, prosecutor Alan MacSporran said authorities had erred in telling the court that Haneef's SIM card had been discovered inside the vehicle used to attack the Glasgow airport. The card was found in the possession of Sabeel Ahmed in Liverpool, more than 300 kilometers (186 miles) from the attack scene.

The second error related to claims that that Haneef had lived with the Ahmed brothers in Liverpool before he moved to Australia from Britain last year. The trio had only spent time together in Britain.

Haneef has denied knowing anything about the British bomb plot, and told police he only gave his SIM card to his cousin so he could take advantage of extra minutes left on the account.

Haneef was arrested on July 2 as he tried to leave Australia for India with a one-way ticket. He told police he was rushing to join his family because his daughter had been born a few days earlier by emergency Caesarean section.

A court ordered Haneef's release on bail last week, but Immigration Minister Kevin Andrews kept him in prison by canceling his visa on character grounds, based on information provided by the federal police.

Because he has no visa, Haneef will likely be moved to an immigration detention center in Sydney while he appeals the immigration minister's decision. That case is due before a court on Aug. 8.

If his appeal fails, Haneef could be deported to India.

Andrews has said he stands by his decision to revoke Haneef's visa, and was expected to hold a press conference later Friday.