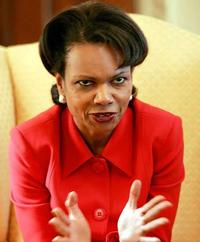 Rice told the U.S.-funded Radio Sawa that she did not have any dates for a trip to the North African country. Libya is hoping for increased cooperation with Europe and the United States after it recently freed six foreign medical workers who had been held for more than eight years on charges they infected children with AIDS.

"Libya made an important strategic decision to get rid of its weapons of mass destruction," Rice said. "As a result, it has put itself on a path that is leading to investment in Libya by western companies, which could not invest there before. I know that American companies are very interested in working in Libya."

Libya has been attempting for years to end its status as a pariah as it seeks international help to renovate its long-decrepit economy. Libyan officials argued that with the release of the medics, the country's slate with the outside world is clean.

In 2003, it accepted responsibility for the 1988 bombing of Pan Am Flight 103 over Lockerbie, Scotland, which killed 270 people, and agreed to pay restitution to the victims. Leader Moammar Gadhafi also announced he was dismantling his nuclear weapons program. The steps brought a lifting of U.S. and European sanctions on Libya.

Since then, international investment has increased in Libya's oil sector - its only considerable industry, providing most of its gross domestic product of nearly $75 billion (EUR54.5 billion).