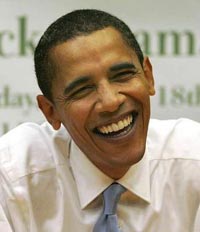 Barack Obama who was born in Hawaii, had family in Kenya, worked in New York and went to school in California and Massachusetts could have lived everywhere.

But he settled here, in a prominent neighborhood on Chicago's South Side that has a history of influential residents. In many ways, the Democratic presidential candidate is the epitome of the place he calls home: a mix of black and white residents who are wealthy, well-educated and liberal-leaning.

Ringed by communities where people are poorer and more likely to have a high school diploma and not a college degree, the neighborhood where the Obamas live is an urban island of intellectual and financial prosperity, although it too has residents living below the poverty line.

Just off the south shore of Lake Michigan, the Hyde Park-Kenwood area is a showcase of high-rises, condominiums, vintage homes and stately mansions. It has generic national chain stores and unique local businesses like the barber shop where Obama gets his hair cut, the pizza place his family calls for takeout and the island-inspired restaurant where Michelle Obama fancies the grilled tilapia.

"Can you believe every time she comes she gives me a hug? ... I'm just her waitress," said the Calypso Cafe's Mina Lewis, who talks fondly of the days before the presidential campaign when Michelle Obama would come in with her daughters and friends.

With the intellectual vibe of a college town and the tree-lined streets to match, Obama's neighborhood is dominated by the prestigious University of Chicago, where he once taught constitutional law.

High achievement and diversity are hallmarks of his Hyde Park-Kenwood community, technically two adjoining neighborhoods but usually referred to collectively. The community has been home to a long list of well-known residents, from the nation's first black woman senator and Chicago's first black mayor to legendary Scopes Trial defense attorney Clarence Darrow and an assortment of Nobel Prize winners and business magnates.

With a university at its core, it's not surprising the community far outpaces surrounding neighborhoods when it comes to the number of residents holding advanced college degrees.

The neighborhood is also much more prosperous than some of the city's South Side communities that border it. Homes sell for a median price of almost $300,000 (EUR217,000), more than three times that of the nearby Woodlawn neighborhood.

The median family income of $57,460 (EUR41,629) in Hyde Park and $43,554 (EUR31,554) inKenwood also are three times greater than the median incomes in some neighboring communities, according to the latest census data.

The face of the neighborhood is mixed. Hyde Park is close to evenly split between blacks and whites with a small Hispanic population and Kenwood, which is smaller, has almost four times as many blacks as whites. Surrounding communities are predominantly black.

Hyde Park-Kenwood is a community that prides itself on an independent-minded brand of politician - something Illinois' junior senator is selling in his bid to become the country's first black president.

Rabbi Emeritus Arnold Jacob Wolf, whose landmark Jewish temple is across the street from Obama's home, said he sensed the political promise in the as-yet-unknown Obama when he met him a decade ago during Obama's successful run for the Illinois Senate.

"I said to him, 'Mr. Obama, someday you will be vice president of the United States,' and he said to me, 'Why vice president?"' said Wolf of KAM Isaiah Israel, a Chicago landmark that boasts the city's oldest Jewish congregation.

Obama came to the area when he moved to Chicago in the mid 1980s to work as a community organizer before he left for Harvard Law School. Later, the neighborhood was a natural fit for him and his wife Michelle, who grew up on the South Side, because they both had history there.

"Family and community are extremely important to us. We have a strong community of friends and of course my Mom lives in the area," Michelle Obama said in a written statement provided by the campaign. Michelle Obama's father died before she married Obama in 1992.

Today, the Obamas are raising their two young daughters in a million-dollar-plus home in a ritzy part of the neighborhood's Kenwood section, a landmark district.

With grand homes set back on deep lots, a street sign designating the historic district touts how it once was home to leading industrialists who had their residences designed by such famous architects as Frank Lloyd Wright.

Just down the block from where he lives is an honorary street designation for the pioneering black woman who in 1946 was the first to get her law degree from the University of Chicago. That woman, Jewel Lafontant-Mankarious, is also the late mother of close Obama adviser John Rogers Jr.

To Rogers, the neighborhood is an "oasis" of diversity and intellectualism. "What better way to define what you're all about than where you choose to live and bring up your family."