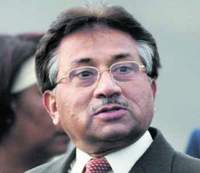 Chaudhry's March 9 suspension had sparked protests by lawyers and opposition parties that have grown into a powerful pro-democracy movement just as Musharraf faces a rising tide of Islamic militancy.

The verdict is a major blow to Musharraf's standing and probably the biggest challenge to his dominance since he seized power in a coup in 1999. It could further complicate his bid to win a new five-year presidential term this fall.

As lawyers celebrated outside the court in Islamabad, Chaudhry's chief counsel Aitzaz Ahsan told reporters that the case alleging misconduct by Chaudhry had been "quashed."

"He has been restored and it is a victory for the entire nation."

Throngs of lawyers converged on the attorney, enthusiastically chanting "Go Musharraf Go!" The verdict also prompted celebrations among gatherings of lawyers in major cities, including Lahore and Rawalpindi.

Musharraf suspended Chaudhry for allegedly pulling rank to secure a police job for his son and enjoying unwarranted privileges such as the use of government aircraft.

The government insists the case has no political motive and that Musharraf had little choice under the constitution but to suspend Chaudhry.

However, opponents accuse Musharraf of plotting to remove an independent-minded judge to forestall legal challenges to his plan to ask lawmakers for another term this fall.

Prime Minister Shaukat Aziz on Friday accepted the ruling and appealed for national unity as Pakistan moves toward elections.

"I would like to emphasize that we must all accept the verdict with grace and dignity reflective of a mature nation. This is not the time to claim victory or defeat. The Constitution and the law have prevailed and must prevail at all times," he was quoted as saying by the state-run Associated Press of Pakistan.

A top Pakistani human rights activist said the verdict demonstrated the independence of the judiciary and was a victory for civil society.

"It's very clear that guns and intimidation will not bow down civil society or civil institutions of Pakistan," said Asma Jehangir, chairman of the nongovernmental Human Rights Commission of Pakistan.