Former President George H.W. Bush presented the National Constitution Center with his World War II service revolver, returned to him 60 years after he gave it to a lieutenant on the submarine that rescued him after his plane was shot down. 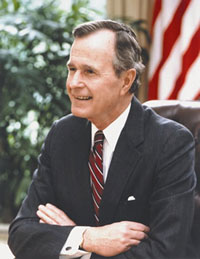 The son of the late Lt. J.G. Albert Brostrom on Wednesday returned the .38-caliber Smith & Wesson revolver and its leather shoulder holster to the former president, who in turn presented it to Constitution Center president and CEO Joseph Torsella for permanent display in the museum.

Brostrom was the sonar man on the USS Finback, the Navy sub that rescued Bush on Sept. 2, 1944, after the future president's plane was shot down by the Japanese in the Pacific. Brostrom met Bush as he stepped aboard the submarine, brought him to the infirmary, and later shared his bunk with the president.

As he left the Finback, Bush gave Brostrom his revolver in gratitude.

Ron Brostrom, 59, of Chester Springs, Pennsylvania, said his father never spoke to his family about the war, except for the kindness and sense of humor of the pilot who gave him the revolver.

"We only knew it was a 20-year-old lieutenant," Ron Brostrom said.

It was not until 1980 when Bush - then a vice-presidential candidate - announced he was looking for Finback crew members that the family realized who that pilot was.

"Dad was kind of like, 'The kid did OK,"' Brostrom said with a laugh.

After his discharge, Brostrom's father married, raised two sons and worked for many years as an engineer for General Electric. He died in 1982.

"Dad told us, 'He (Bush) was a young man doing a good job at a very tough job,"' Brostrom said. "It's a real honor for me and my family to be able to give it back to him today."

Bush has been associated with the center since its creation by the Constitutional Heritage Act in 1988, passed when he was vice president. He is chairman of the board of trustees, has taken part in public service announcements and promotional videos about the museum, and has served for 10 years on its National Honorary Committee with his wife, Barbara, and all living former presidents and their wives.

The Constitution Center, a nonprofit organization founded in 2003, is dedicated to increasing public understanding of the U.S. Constitution. It contains a multimedia show, more than 100 exhibits on constitutional history, and artifacts including a copy of the Emancipation Proclamation signed by President Abraham Lincoln and a notorious "butterfly ballot" that confused voters in Florida's Palm Beach County in the disputed 2000 presidential election.