Indian lawmakers went to the polls Thursday in an election widely expected to give India its first female president. But the milestone has been marred by more controversy and mudslinging than any recent contests. 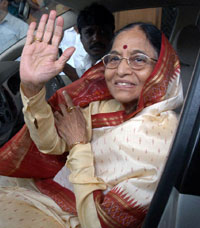 Several thousand lawmakers and members of state legislatures began casting their votes Thursday morning in a contest that is widely expected to ensure victory for Pratibha Patil, the candidate of the ruling Congress party and its allies - who control a majority of the votes.

Patil, 72, the governor of the northwestern state of Rajasthan, is pitted against Bhairon Singh Shekhawat, 84, the candidate of the main opposition Bharatiya Janata Party and the serving vice president.

Patil's nomination was initially hailed as an opportunity to promote a woman to the head of state in a country that often discriminates against females. But her candidacy quickly drew fire as opponents and analysts attacked her lack of national stature and unearthed a series of embarrassing scandals from her past.

Analysts say Patil's main qualification for the presidency is her unswerving devotion to Sonia Gandhi, leader of the Congress party, and Gandhi's powerful family, which has historically controlled the party.

The position of the Indian president is largely ceremonial, but is vested with powers that can be significant in times of political crisis. The president is also the supreme commander of the armed forces.

She was called "a person unfit to occupy the highest constitutional office" by L. K. Advani, a senior leader of the BJP, in a statement addressed to Prime Minister Manmohan Singh.

Her critics pounced after a court in Maharashtra state decided to hear a case linking her husband, Devisinh Shekhawat, to the suicide of a schoolteacher seven years ago, and after her brother was linked to a murder.

The opposition, led by the Hindu-nationalist BJP, also alleged a bank she set up went under when her family members defaulted on huge loans.

The Congress party reacted by questioning her opponent Shekhawat's patriotism, claiming he had been part of the British-run police force in 1942 when India's freedom struggle was at its peak, The Times of India reported recently.

Patil's own words have also come back to haunt her. She upset Islamic leaders by asking Muslim women to abandon their head scarves, saying women started wearing them in India to save themselves from 16th century Muslim invaders.

Historians disagreed with Patil. They said women wearing scarves in the presence of outsiders was already widespread in India in the 13th century.

Patil would be the first female president of the Rashtrapati Bhawan, the massive 340-room, colonial era presidential palace.

Choosing a presidential candidate is a symbolic gesture by political parties seeking to display their secular and progressive credentials.

Hindu-majority India has had three Muslim presidents, including incumbent A. P. J. Abdul Kalam, since winning independence from Britain in 1947. It has also had a president from the minority Sikh community. Kalam's predecessor, K. R. Narayanan, came from the bottom of the caste hierarchy.

Patil was a lawyer before she joined politics and became a member of the state legislature in 1962. She was appointed a minister several times in the Maharashtra state government between 1962 and 1985. In the following decade, she served as a member of Indian Parliament.