France’s foreign minister urged Albanians to restart talks with Serbia on the province's future during his visit to Kosovo, but their leader warned that renewed negotiations could impose the partition of the province along ethnic lines. 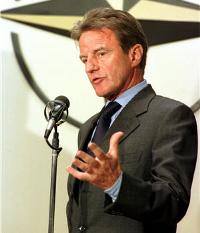 Bernard Kouchner arrived in Kosovo after urging Serbia on Thursday to drop its rejection of the Western-backed U.N. draft resolution and engage in finding a compromise with ethnic Albanian leaders seeking independence.

The draft resolution has been woven around a proposal made by France's president, Nicolas Sarkozy, for an additional period of talks between Kosovo's Albanians and Serb officials. Sarkozy's proposal was aimed at winning the support of Russia, which holds veto power in the U.N.

The European Union is counting on Sarkozy to resolve the dispute between the West and Russia over Kosovo. Sarkozy and Putin discussed the issue by telephone this week.

On Thursday, Russia joined Serbia in rejecting the draft that Belgrade says represents a shortcut to independence to Kosovo. The province is officially part of Serbia, but has been under U.N. and NATO administration since 1999.

Before coming to Kosovo, Kouchner told Serbian leaders in Belgrade that if the two sides fail to find a compromise in eventual talks, internationally supervised independence for Kosovo would remain the sole option.

He said a few months were made available to reach an agreement.

Ethnic Albanian leaders are under growing pressure from ethnic Albanians - who make up 90 percent of province's 2 million people - impatient to see the province's leadership deliver on the promises of independence for Serbia.

In a sign of underlying tensions, Veton Surroi, a prominent Kosovo politician and the leader of an opposition party, wrote that achieving independence through the U.N. Security Council "is a dead concept clearly abandoned by the West" after Russia's threat to veto any resolution granting Kosovo independence.

"In the next round of talks, Kosovo could face two new demands: the territorial and political autonomy for Kosovo's Serbs or the territorial division of Kosovo," Surroi said in a letter obtained by the Associated Press, sent to a team of Kosovo leaders including the president and prime minister.

Such a principle, Surroi wrote, would "definitely mean violence and population displacement."

It is the first time an ethnic Albanian leader participating in negotiations has raised questions over the strategy to resolve the province's future.

The ethnic Albanian delegation is to meet U.S. Secretary of State Condoleezza Rice later this month.

Kouchner, who served as Kosovo's U.N. administrator after the 1999 war, will visit a 14th century Serbian Orthodox monastery in western Kosovo, a symbol of the Serbian cultural and religious heritage in the province, which Serbs regard as the cradle of their civilization.