Designer Raffaella Curiel barred 15 models from her show in Rome because they were too skinny. 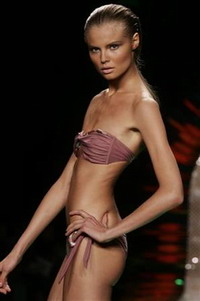 "I was forced to fire 15 models who were too skinny and for the others I still had to tighten the clothes," Curiel was quoted as saying by Corriere della Sera daily.

Curiel said it was still difficult to find models that fit the rules imposed by the industry's recent self-regulatory code as well as her own personal preferences.

"I absolutely don't want models who are too skinny," she told RAI TV. "They are a bad example for young generations."

A fashion manifesto initiated by the government and signed in December by representatives of the Italian fashion chamber called for regulations on age and weight for models participating in the myriad of fashion events held in this country year round.

It came in the wake of a 21-year-old Brazilian model's death from anorexia a month earlier. At the time of her death the 1.72 meters tall (5-foot-8 inch) model weighed (40 kilograms) 88 pounds.

The code bans models under 16 years of age from the catwalk and requires models to present a health certificate before auditioning for a show. The code also carries a promise from designers to add larger sizes to their collections.