The National Science Foundation on Tuesday chose the state of South Dakota's closed Homestake Gold Mine as the site for a new underground physics lab to study the history and makeup of the universe. 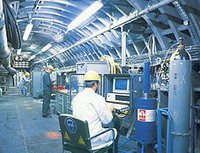 South Dakota, a Northern Plains state, won the project, called the Deep Underground Science and Engineering Laboratory, over three other states - Colorado, Minnesota and Washington. The NSF said the lab, located at Lead, South Dakota.D., in the northern Black Hills, will be the largest and deepest facility of its kind in the world.

The research team developing the project is expected to receive up to $5 million (3.66 million EUR) a year for three years to continue planning for the lab. Construction is scheduled to start in fiscal year 2010, depending on funding from Congress.

The lab would conduct research in physics, astrophysics, earth science and geomicrobiology, studying particles from the sun, the formation of minerals and hydrology inside the Earth and microbial life deep underground.

Physicists want to go deep underground to conduct experiments to increase their understanding of the universe's composition, its beginning and its future. More than a mile (1.6 kilometers) of rock would filter out many of the cosmic rays.

"The reason for going underground is the same reason why astronomers look at stars at night," said Ken Lande, a University of Pennsylvania physicist who manages a small existing underground lab at Homestake.

Scientists also want to study dark matter, which has gravitational force but is not visible. Other experiments would study whether protons decay, which the NSF has said would provide evidence that all the fundamental forces are united at some very high energy.

South Dakota touted Homestake's depth, its existing miles (kilometers) of tunnels and shafts, and immediate availability as reasons to put the lab there. Mining stopped at Homestake seven years ago.