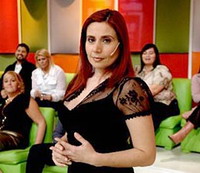 The show titled "Cuestion de Peso" - or "A Question of Weight" - is drawing attention to a public health threat in Argentina, where 50 percent of 36 million inhabitants are considered overweight, according to a nation survey in 2006 by the Health Ministry. About 6 percent of Argentines are considered obese, the ministry found.

Following in the footsteps of U.S. program "The Biggest Loser," the Argentine broadcast on Canal 13 currently is the most popular afternoon offering in Argentina. Neighboring Chile has its own version of the Endemol production, also broadcast by Canal 13.

The show groups participants by degree of obesity as they undergo dieting, workouts and psychological counseling. They have to lose 1 percent of their weight each week to stay on the show and continue receiving free treatment.

"My mother used to bathe me. Now I can bathe myself and tie my own shoes," he said.