The American Psychological Association is starting the first review of its 10-year-old policy on counseling gays and lesbians, a step that gay-rights activists hope will end with a denunciation of attempts by therapists to change sexual orientation. 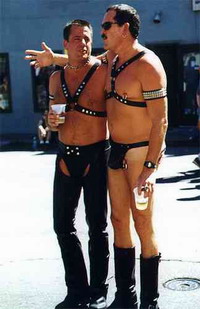 Such efforts - often called reparative therapy or conversion therapy - are considered futile and harmful by many gay-rights activists. Conservative groups defend the right to offer such treatment, and say people with their viewpoint have been excluded from the review panel.

A six-member task force set up by the APA has its first meeting beginning next Tuesday.

Already, scores of conservative religious leaders and counselors, representing such groups as the Southern Baptist Convention and Focus on the Family, have written a joint letter to the APA, expressing concern that the task force's proposals would not properly accommodate gays and lesbians whose religious beliefs condemn gay sex.

"We believe that psychologists should assist clients to develop lives that they value, even if that means they decline to identify as homosexual," said the letter, which requested a meeting between APA leaders and some of the signatories.

APA spokeswoman Rhea Farberman said a decision on when and how to reply to the letter had not yet been made.

The current APA policy, adopted in 1997, opposes any counseling that treats homosexuality as a mental illness, but does not explicitly denounce reparative therapy. The APA has decided to review the policy at a time when gay-rights groups are increasingly critical of such treatment and groups that support it.

Conservatives contend that the review's outcome is preordained because the task force is dominated by gay-rights supporters.

"We're concerned," said Carrie Gordon Earll of Focus on the Family. "The APA does not have a good track record of listening to other views."

Joseph Nicolosi, a leading proponent of reparative therapy, predicted the task force would propose a ban of the practice - and he vowed to resist such a move. Nicolosi, who was rejected as a task force nominee, is president of the National Association for Research and Therapy of Homosexuality.

Clinton Anderson, director of the APA's Lesbian, Gay and Bisexual Concerns Office, insisted the panel would base its findings on scientific research, not ideology. He defended the decision to reject certain conservative applicants to the task force.

"We cannot take into account what are fundamentally negative religious perceptions of homosexuality - they don't fit into our world view," Anderson said.

One of the counselors denied a seat on the task force was Warren Throckmorton, a psychology professor at Grove City College near Pittsburgh. Though Throckmorton does not advocate a specific form of reparative therapy, he argues that psychologists should respect gay clients' religious beliefs in cases where the faith teaches that homosexual behavior is wrong.

"We work with clients to pursue their chosen values," he said. "If they are core, unwavering commitments to their religious belief, therapists should not try to persuade them differently under the guise of science."

However, one of the task force members, New York City psychiatrist Jack Drescher, said the conservatives do not acknowledge the harm that might be caused when a gay patient - even voluntarily - undergoes therapy to suppress or change sexual orientation.

"They want a rubber stamp of approval for a form of therapy that's questionable in its efficacy and they don't want to deal with the issue of harmful side effects," said Drescher, who is editor of the Journal of Gay and Lesbian Psychotherapy.

As the APA planned the policy review, it received input from gay-rights groups, including Parents, Families and Friends of Lesbians and Gays.

PFLAG's executive director, Jody Huckaby, said reparative therapy had been particularly harmful for young gays whose parents insisted on trying to change their sexual orientation. His group contends these efforts can cause depression and suicidal behavior.

Current APA policy stipulates that no therapy should occur without "informed consent" of a gay or lesbian client. Jason Cianciotto of the National Gay and Lesbian Task Force said he hoped the APA would declare that no young person could ever be deemed to have given informed consent, and thus no reparative therapy would be approved for minors.

The largest ministry that does counsel gays to change their sexual orientation is Exodus International. Its president, Alan Chambers - who says prayer and therapy enabled him to move away from homosexuality - is among those apprehensive of the APA review.

"I had hoped for more diversity on that panel," Chambers said. "I see a lot of people who represent the other side - who don't believe that people like me have a right to self-determination."

The task force may submit a preliminary report to the APA's directors in December. Anderson said a final report might be completed by next March.