U.S. and Canadian authorities have shut down a drug-smuggling operation responsible for transporting large volumes of highly potent, Canadian-grown marijuana. 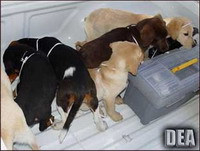 U.S. Attorney Stephen Murphy said four Michigan men have been charged in a criminal complaint and six others have been arrested for smuggling into the U.S. 370 pounds (167.8 kilograms) of marijuana known as "BC Bud".

Ahmad Abboud, 29, Tony Davis, 27, and Jonathan Yaldo, 26, were arrested June 28 and are named in separate complaints, along with Yahab Abboud, 27.

Ahmad Abboud is charged in the complaint with conspiracy to import marijuana. The other three suspects are charged with marijuana possession with the intent to distribute.

All four men are free on bond, pending a July 17 preliminary hearing.

Murphy said the hydroponically grown marijuana is chemically supercharged and comparable to cocaine in its effects and its ability to fetch up to $6,000 (4,390 EUR) per pound (0.45 kilogram).

He said the four men charged played a large role in smuggling marijuana that came from British Columbia and was transported from Toronto to the Detroit area.