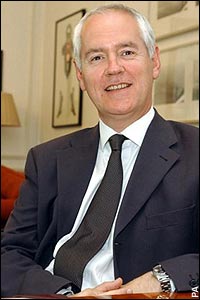 The Crown Prosecution Service, which prosecutes cases in England, had sought the extradition of Russian businessman and former KGB agent Andrei Lugovoi.

"The Russian response has now been conveyed to us and the Russian authorities have declined to extradite Andrei Lugovoi. They have said that they are prepared to put Mr. Lugovoi on trial in Russia if the evidence is forwarded to them," said Ken Macdonald, the director of public prosecutions.

"The allegation against Mr. Lugovoi is that he murdered a British citizen by deliberate poisoning and that he committed this extraordinarily grave crime here in our capital city. The appropriate venue for his trial is therefore London."

The prosecuting agency announced its decision to seek Lugovoi's extradition on May 22.

The formal response was received on Monday, the agency said, but it was not unexpected.

Litvinenko died Nov. 23 in a London hospital after ingesting radioactive polonium-210. In a deathbed statement, he accused Putin of being behind his killing.

He had also accused Russian authorities of being behind a deadly 1999 apartment blast and the murder of investigative journalist Anna Politkovskaya.

Russian authorities have suggested Litvinenko's murder was masterminded by Putin's enemies abroad, such as Boris Berezovsky, who is living in exile in London.

Lugovoi has said Litvinenko was working for MI6, the British foreign intelligence agency, and that British intelligence may have had a hand in the slaying.

Lugovoi has claimed Litvinenko tried to recruit him to work for MI6 and to gather compromising materials about Putin and his family.

Radioactive traces were found at a dozen sites across London after Litvinenko's death, including three hotels, a stadium, two planes and an office building used by Berezovsky.

In Britain, 700 people were tested for polonium contamination and 670 were tested abroad. All were eventually released.