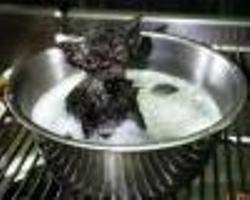 Veteran Shanghai cat rescuer Duo Zirong started off her mission of deliverance on Friday when she called police to stop a truck stuffed with some 800 live cats, the China Daily said.

The standoff happened at a parking lot in a southern suburb of Shanghai. It continued for hours while cat lovers spread word of the incident online, eventually raising 10,000 yuan (US$1,320; EUR966) in donations to buy the whole load.

They now hope to place them in homes after posting their pictures and profiles on the Internet.

"They were so frightened," it quoted one of the rescuers, Huo Puyang, as saying.

"Some bit people when they tried to let them out of the boxes. Some still hide in dark corners and will not come out for food," Huo said.

Cat meat is considered a delicacy in southern China and cats are sold live to markets where they are slaughtered fresh for customers.