A federal public defender said Monday his client will be charged in the four-year-old case of a pizza deliveryman who was killed by a bomb locked onto his neck. 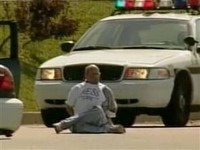 Public defender Thomas Patton was appointed to represent Diehl-Armstrong in September after she had repeatedly been interviewed by investigators in the 2003 death of Brian Wells. The 46-year-old pizza deliveryman died in an explosion shortly after robbing a suburban Erie bank with a bomb that had been locked onto his neck by a crude metal collar.

The attorney asked a judge on Monday to prevent prosecutors from holding a news conference to announce the indictment of his client, Marjorie Diehl-Armstrong.

Though Patton does not say in his emergency motion for a gag order how or why Diehl-Armstrong will be charged, the attorney wrote, "it is anticipated that an indictment will be forthcoming shortly."

Diehl-Armstrong, 58, is serving seven to 20 years in state prison for pleading guilty but mentally ill to killing her boyfriend, James Roden, in 2003.

Roden's killing led police to question Diehl-Armstrong in the Wells case because Roden's body was found in the freezer of William Rothstein. Rothstein, who has since died, lived near the TV tower where Wells was sent to deliver his last pizza the day he died.

Patton said publicity generated by such a news conference could prevent Diehl-Armstrong from getting a fair trial, noting that USA Today and TV shows such as "America's Most Wanted" have already covered the case. The Erie Times-News has published more than 150 stories on the Wells investigation and the newspaper's Web site has a link dedicated to the case, Patton noted.

No hearing was immediately scheduled on Patton's request. He did not immediately return calls for comment.