Hundreds of onlookers witnessed how a leading civil rights group in the United States put to rest a long-standing expression of racism by symbolically burying a racist slur generally referred to as the "N-word." 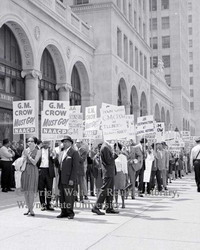 Delegates from across the country gathered during the annual convention of the National Association for the Advancement of Colored People in Detroit and marched about a quarter-mile for the ceremony and rally. Along the way, two Percheron horses pulled a pine box adorned with a bouquet of fake black roses and a black ribbon printed with a derivation of the word.

The coffin is to be placed at historically black Detroit Memorial Park Cemetery and will have a headstone.

The group has been campaigning against the casual use of the word "nigger," sometimes referred to as the "N-word" because of its painful history as a racist epithet intertwined with slavery in America. Mainstream African-Americans are particularly offended that many rap musicians use it in lyrics, which has revived it in American slang.

"Today we're not just burying the N-word, we're taking it out of our spirit," said Detroit Mayor Kwame Kilpatrick. "We gather burying all the things that go with the N-word."

"This was the greatest child that racism ever birthed," the Rev. Otis Moss III, assistant pastor at Trinity United Church of Christ in Chicago, said in his eulogy.

Public discussion on the word's use increased last year following a tirade by "Seinfeld" actor Michael Richards, who used it repeatedly during a Los Angeles comedy routine and later issued a public apology.

The issue about racially insensitive remarks heated up earlier this year after radio talk show host Don Imus described black members of the Rutgers University women's basketball team as "nappy-headed hos" on April 4. Nappy is a derogatory reference to the hair of some black people and "ho" is slang for "whore."

Black leaders, including the Revs. Jesse Jackson and Al Sharpton, have challenged the entertainment industry and the American public to stop using the N-word and other racial slurs.

"They wouldn't make rap songs if you didn't buy them. Stop supporting the stuff you don't want to hear," said Blow, who is credited with helping create the genre's popularity in the late 1970s and early 1980s.

"I've never used the N-word and I've recorded over 150 rap songs. I've never used profanity. It's possible you can use hip-hop and not offend anyone."

The NAACP held a symbolic funeral in Detroit in 1944 for Jim Crow, the systematic, mostly Southern practice of discrimination against and segregation of blacks from the end of post-Civil War Reconstruction into the mid-20th century.