Carnival Cruise Lines president and chief executive Robert Dickinson, who has been with the company since its start 35 years ago, will retire at the end of the year. 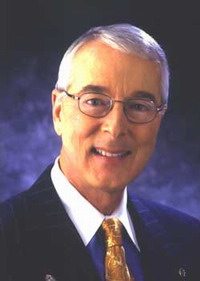 Dickinson, 64, has been instrumental in forming Carnival Corp. into the world's largest cruise operator while using his sense of humor to build relationships along the way. Dickinson, who will turn 65 in August, said he is in good health.

"I'm not dead. I'm just segueing into another part of my life," he told The Associated Press on Monday.

Dickinson joined Carnival Cruise Lines in 1972. He worked his way up the organization under founder Ted Arison and his son Micky, who now leads Carnival Corp. and called Dickinson, "one of the most influential people in the development of the modern-day cruise industry."

Dickinson became senior vice president of sales and marketing in 1979. He was part of Carnival's early 1980s expansion when it built the Tropicale. As the industry's first new ship in years, it led to an industry-wide shipbuilding boom and the addition of several new Carnival ships later that decade.

Dickinson's tenure also saw the popular "Fun Ships" advertising blitz that featured the "Ain't We Got Fun" television campaign, which showed cruise vacationers dancing and gambling and put the focus on the ship rather than the port of call.

"To me, the big leap of faith was to ask people to take a chance on what was going to happen on the big white box before they got to the ... St. Thomases of the world," Dickinson said.

In 1993, he was promoted to Carnival Cruise Lines president, and he took the title of chief executive in 2005.

During his career, he worked to convince travel agents that it would be more lucrative for them to sell cruise vacations than airline tickets, which changed the way agents did business, said Brad Anderson, co-president of America's Vacation Center/American Express.

"The folks at Carnival under Bob's leadership were always early adopters," Anderson said. "Not everything they adopted grew up to what they thought it was going to be, but they were always willing to adopt new things."

Dickinson said he will remain on Carnival Corp.'s board of directors as he pursues charitable causes, such as working to ease Miami's homelessness problem as chairman of Camillus House, Dickinson said.

"I'm at the point in my life where I can contribute to the community," Dickinson said. "It's a way to get to be significant rather than just successful. I've never seen a Brinks truck at a funeral."