Former astronaut Lisa Nowak came to Florida to meet her rival for the affections of a fellow astronaut. She wanted to know where she stood in the bizarre love triangle. 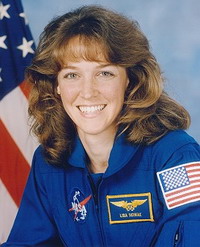 In it, Orlando Police Detective Chris Becton asks Nowak after her arrest in February why she wanted to meet Navy Capt. Colleen Shipman in a parking lot at the Orlando International Airport.

Nowak, 44, is accused of attacking Shipman with pepper spray and trying to jump into her car. She has pleaded not guilty to charges of attempted kidnapping, battery and burglary with assault.

In a bag Nowak was carrying, police officers found a mallet, a 4-inch (10.2-centimeter) knife and a pellet gun. They also recovered a wig and a trench coat which they believe were used as a disguise. She told the detective she only wanted to scare Shipman with the weapons.

The 72-page interview transcript, with portions redacted, was released by the State Attorney's Office.

Nowak repeatedly asked to speak to Shipman and asked the detective if Shipman, who was interviewed before Nowak, knew who she was.

Nowak told Becton she wanted to tell Shipman of her involvement with Bill Oefelein, a colleague who told detectives he had a two-year relationship with Nowak but ended it some time after he started a relationship with Shipman.

"I thought it was important that she knew," Nowak told the detective. "I wanted her to have the same awareness, I guess, for my potential, or whatever."

Nowak suggested that her relationship with Oefelein was romantic but platonic since she "wouldn't go beyond a certain point" while in the process of separating from her husband. She indicated that she was holding out for a possible future with Oefelein.

"I just needed to know if she was aware," Nowak said. "He picked me up from the airport two weeks ago. I mean, I mean, you just don't do that for anybody."

When asked if she intended to kill Shipman if she did not talk, Nowak said no.

Asked if it would have been acceptable for Oefelein to date both of them, she said "as long as everybody knows that that's the case."

She also said it was her husband, not Oefelein, who hurt her.

"My husband is the only person who broke my heart ... over the years, I guess," she said. "It happened over time."

An attorney for Nowak, Donald Lykkebak, asked a judge last month to seal the transcript, but the judge took no action. Lykkebak also asked that the interview not be introduced as evidence during Nowak's trial, claiming she was not properly advised of her constitutional rights.

However, the transcript indicates that Becton told her she had the right to remain silent, the right to an attorney and that what she said could be used against her in court.

A hearing on that motion and another to suppress evidence found in Nowak's car is scheduled for the end of the month.

"The prosecution's pattern of trickling out information in this case is nothing new," Lykkebak said in a statement released by his spokeswoman, Marti Mackenzie. "The expected result has been to keep Lisa Nowak's case in the headlines. We disapprove of this tactic."

A lawyer for Shipman called Nowak's claim that she did not intend to harm Shipman "laughable."

"It shows her consciousness of guilt," said Kepler Funk, Shipman's attorney. "It doesn't take a rocket scientist to know what was in her head."