Morales tries to end strike at Bolivia's largest tin mine

President Evo Morales will personally negotiate with strikers who have shut down Bolivia's largest tin mine. 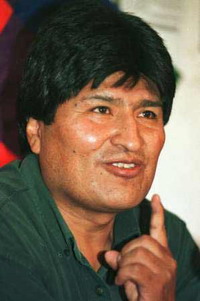 Morales tries to end strike at Bolivia's largest tin mine

Miners at the state-operated Huanuni tin mine went on strike last week to demand greater administrative control of the mine's growing profits. Thanks to high international tin prices, it earned Morales' government US$15.8 million (11.6 million EUR) for the first five months of 2007.

The strike is costing Bolivian state mining company Comibol the production of some 25 metric tons (27 U.S. tons) of tin ore each day - roughly 80 percent of the Andean country's total tin output, according to Mining Ministry spokesman Alfredo Zaconeta. Bolivia has lost at least US$1.5 million (1.1 million EUR) in tin revenues since the strike began, he said.

Bolivia is a distant fourth among the world's largest tin producers behind China, Indonesia and Peru, exporting US$144 million (106 million EUR) of both ore and refined tin in 2006.

The Huanuni mine is at the heart of the often testy relationship between miners and the Morales administration, which seeks more income from the country's vast mineral resources.

Though they largely backed Morales' 2005 election, many Bolivian miners are wary of his plans to nationalize their industry, which has enjoyed only minimal taxes and regulation since Comibol collapsed during a 1980s crash in global metal prices.

Last week the Huanuni miners declined an invitation to negotiate in the capital La Paz, demanding an audience with the president on their own turf and blockading a key highway. Police later cleared the route with tear gas, and over the weekend Morales offered to meet the miners in Huanuni once they return to work.

"At no time can dialogue exist under pressure," presidential spokesman Alex Contreras said on Monday.

Until last year, Huanuni had been divided between some 1,000 state-employed miners and another 4,000 independent miners. In October the rival camps fought with rifles and dynamite over access to the mine in a two-day clash that left 16 dead.

But the converted miners have retained their independent streak, grumbling over the revenues delivered to the government each month.

Many are uncomfortable with the recent deployment of 200 soldiers to defend Huanuni's veins from thieves, recalling last year's violence, Zaconeta said.

"It's a wound that still hasn't scarred over completely," he said.