European Union citizens will be protected by the U.S. Privacy Act under an anti-terror deal with Washington on the sharing of trans-Atlantic air passenger data. 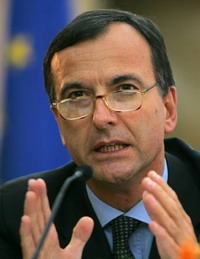 Seeking to dispel concerns over a possible erosion of privacy, EU Justice and Home Affairs Commissioner Franco Frattini told EU parliamentarians that the binding deal, backed by envoys from the EU's 27 nations two weeks ago, provides for a high level of data protection.

"Protection given under the U.S. Privacy Act will be extended to non-U.S. citizens, particularly with regard to redress and compensation. Citizens of the EU will be entitled to protection under the same privacy act, which wasn't the case under the previous agreement," Frattini told the European Parliament.

The new text is to replace an interim deal that expires at the end of July. Failure to strike a deal by then would have risked flight chaos, as Washington had warned that airlines failing to share passenger data under its anti-terror screening rules faced fines of up to US$6,000 (4,450 EUR) per passenger and the loss of landing rights.

Differences over how to balance security needs with concerns over passengers' privacy led to protracted negotiations after a 2004 deal on data sharing was voided by an EU court last year for technical reasons.

Under the new deal, the number of pieces of information transferred to U.S. authorities will be reduced from 34 to 19 - although critics say this is only because some categories of data will be merged.

Data can be kept for a maximum of 15 years, but after the first seven years data will become "dormant" and can only be accessed on a case-by-case basis under strict rules.

Currently, a maximum of 34 pieces of recorded data - such as passenger names, addresses, seat numbers and credit card and travel details - are transferred to U.S. authorities within 15 minutes of a flight's departure for the United States under Washington's anti-terror screening rules.

The current agreement allows the U.S. Customs and Border Protection agency to disclose so-called Passenger Name Records to other U.S. law enforcement agencies for use in anti-terror investigations if those agencies have data protection standards comparable to the EU's legal demands.

EU governments are to give a final, formal endorsement to the deal later this months after they get the green light from the national parliaments.