Prosecutors in New Jersey would not retry a man who spent 22 years in prison for the murder and rape of two children and was recently freed after DNA testing exonerated him. 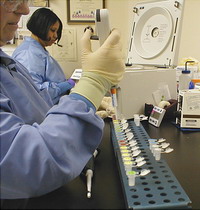 In a statement released before a court hearing Monday, Prosecutor Theodore J. Romankow said he decided not to pursue the charges following "careful re-evaluation of the case" against Byron Halsey.

Halsey, 46, was released from prison May 15 after prosecutors threw out his convictions. New DNA testing, not available when he was convicted, linked a neighbor to the crime.

However, until Monday, Halsey could have been retried on charges of aggravated sexual assault, aggravated manslaughter, felony murder, child abuse and possession of a weapon for an unlawful purpose.

Instead, on the prosecutor's recommendation, a judge dropped all charges.

Halsey had been convicted in 1988 of murdering and sexually assaulting Tyrone and Tina Urquhart, the children of his girlfriend, with whom he lived at a rooming house.

Superior Court Judge Stuart L. Peim vacated Halsey's conviction on May 15 and granted a new trial because the new evidence "would probably change the verdict."

"He's pretty much jumped back into things and immediately started working and piece by piece rebuilding his life," said Vanessa Potkin, a lawyer with the Innocence Project, which is affiliated with Cardozo School of Law at Yeshiva University. "The process is extremely grueling."

Halsey had made a confession before trial, but Innocence Project co-director Barry Scheck said the statement followed 30 hours of interrogation over a 40-hour period.

At trial, the jury opted for life in prison rather than the death sentence, prompting jeering in the courtroom, said Eric Ferrero, a spokesman for the Innocence Project, which is representing Halsey. Halsey was sentenced to two life terms, plus 20 years.

The new DNA test showed that a neighbor in the rooming house, Clifton Hall, was the source of semen recovered at the scene and may have been responsible for the crimes, Ferrero said.

Hall, 49, has now been charged with two counts of murder and one count of aggravated sexual assault, Walsh said. He is being held at a prison for sex offenders because of three sex crimes convictions in the 1990s.