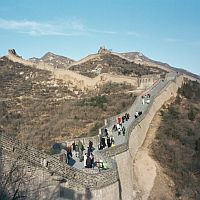 Despite Chinese are proud that their Great Wall has become the new wonder of the World, they are worried that an onslaught of tourism is destroying the fortification designed to defend against foreign invaders.

"The Great Wall has been severely destroyed by visitors, and I am surprised that the Great Wall can still be named as one of the new seven wonders of the world," said Wang Xiaoyu, who was visiting the wall at Badaling from nearby Beijing.

The Great Wall was picked in a worldwide online poll as one of the new seven wonders of the world. The other winners, announced in Lisbon, Portugal at the weekend, are Petra in Jordan, Brazil's statue of Christ the Redeemer, Peru's Machu Picchu, Mexico's Mayan ruins at Chichen Itza, the Colosseum in Rome and the Taj Mahal in India.

The wall weaves for thousands of miles through a dozen provinces and regions across northern China.

Near Beijing, visitors strew garbage across the wall's surface and carve their names into its bricks, while developers lease land at the wall's base for hotels and houses.

Chunks of the wall have been knocked down to make room for roads and buildings.

Wu Shaoyun, who was visiting the wall from Jiangxi province, hoped the new designation would translate into money.

"Being named as one of the new seven wonders of the world will help the Great Wall attract more people during the Beijing Olympic Games, which will also bring even more income for the country," he said.

The earliest sections of the wall were built more than 20 centuries ago to guard against Mongols and other invaders. Other sections were added over the centuries, while many parts have fallen down or been pulled down by villagers who used the bricks to build houses.

Some guidebooks say dilapidated sections in remote areas have been discovered as recently as 2002.

An editorial in the China Daily newspaper Monday said the wall faces environmental and man-made problems that threaten its existence.

"Now is the time to re-evaluate conservation efforts to guarantee it remains a wonder," the editorial said.

The Chinese government had no immediate reaction.

"No arrangements for celebrations have been made so far," said a man surnamed Lu who answered the phone at the Badaling office of the Great Wall Management Office. Like many Chinese officials, he would not give his first name.