Japanese dissatisfied with their PM 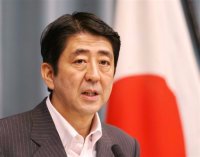 Japanese dissatisfied with their PM

A newspaper poll published on Monday shows that Japanese get more and more dissatisfied with the scandal-hit government of Prime Minister Shinzo Abe, with its disapproval rate hitting the highest level yet.

The result comes as the ruling coalition struggles with a series of scandals and embarrassments ahead of crucial parliamentary elections later this month. A humiliating loss in the polls could prompt leaders of Abe's Liberal Democratic Party to seek his replacement.

The Asahi newspaper said 51 percent of the 1,065 respondents to its latest telephone survey said they do not support Abe's government, up from 48 percent in the previous survey and the worst showing yet in the daily's series of polls.

The government's support rate edged up to 31 percent in the survey, conducted July 7-8, from the 28 percent figure recorded in the previous poll, the paper said.

The showing reflects public dissatisfaction with how the government has handled several recent scandals, including lost pension records affecting millions of cases, and the resignation last week of the defense minister, who caused a storm of criticism by suggesting the atomic bombings of Hiroshima and Nagasaki in 1945 were inevitable, the paper said.

Abe had to extend this year's parliamentary session - pushing the elections back one week to July 29 - to push through legislation partially resolving the missing pension records.

Slightly less than one-third of the Asahi's poll respondents say they approve of the government's handling of the problem, up from less than one-quarter in the previous survey, the paper said. Fifty-six percent disapproved, down from 59 percent, it said.

Nearly 90 percent of the 309 declared candidates for the upper house election said reforming the pensions system would top their agenda if elected, according to a separate Kyodo News agency poll released Monday.

Meanwhile, Japan's main opposition Democratic Party unveiled its manifesto Monday, saying it will clean up the pension-scandal and provide financial benefits to families with children to help stem Japan's low birth rate. The Democrats will also secure 15.3 trillion yen (US$124 billion; EUR91 billion) to finance new projects by streamlining the administration, not by hiking consumption taxes.

The government took a further blow over the weekend amid media and opposition party allegations that newly appointed Agriculture Minister Norihiko Akagi reported 90 million yen (US$729,100; EUR536,260) in office expenses over the past decade for a political office that was registered at his parents' address and no longer operated.

Akagi - who took office last month, replacing his predecessor who committed suicide following money and bribery scandals - has acknowledged using his parents' home to run a political group, but has denied any illegality in his accounting.

No margin of error was provided for either poll.