Australian Prime Minister John Howard on Monday defended his government's warnings that a terrorist attack in Indonesia may be imminent, despite officials saying there was no direct intelligence that a strike was being planned. 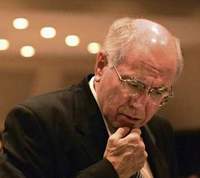 The Foreign Affairs Department reissued a travel advisory to Indonesia on Sunday, warning Australians to rethink travel to the Southeast Asian country because of the threat of terrorist attacks. The advisory did not raise the threat level for attacks.

Howard called the new advisory an upgrade, and said it was based on strong intelligence that an attack by Southeast Asian terrorist network Jemmay Islamiyah was possible.

Canberra has warned Australians since 2002 that Jemaah Islamiyah attacks are possible in Indonesia and some other countries in the region.

"All terrorist threats are serious and the problem is if you don't warn of them and something happens you are legitimately criticised," Howard told Nine Network television. "On the other hand, they may not materialise, but we only give these warnings based on strong intelligence."

Downer said the new advisory was not an upgrade and that "we don't have any information designating a specific target or for that matter a specific time of a terrorist attack."

But he said the advisory was justified because of the potential for Jemaah Islamiyah launching revenge attacks after the June 9 arrest of leader Abu Dujana. An attack "could be imminent," Downer said.

Howard said the government would not issue a warning without reason.

"We don't change these things, we don't upgrade them, we don't make statements unless there is sufficient reason," Howard said. "We recognise the sensitivities within Indonesia whenever something like this is done but we have a greater duty to the safety of Australians, and what we do is we warn them of what the latest assessment is."