Worshippers gathered in Nigerian churches Sunday to pray for the release of a kidnapped British toddler who was seized in the south part of Africa's largest oil producer. 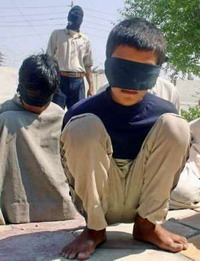 Rev. Christian Onuoha led hymns and prayers at the Assembly of God Church, calling on the kidnappers to release 3-year-old Margaret Hill who was abducted Thursday. Her kidnappers have threatened to kill her unless a ransom is paid or her father takes her place.

"Whether she is in the forest or the creeks, she should be released," he intoned over the bowed heads of residents of the oil-hub of Port Harcourt, where Margaret lives with her British father Mike and his Nigerian wife Oluchi. "The hearts of the parents are heavy."

The kidnap victim's parents met later Sunday with Rivers state Gov. Celestine Omehia in Port Harcourt. Omehia, whose own mother was seized and later freed by kidnappers in May, told reporters afterward that security agents were in contact with the girl's captors and expected freedom for her soon.

"All security agencies are on alert to ensure she is freed unharmed," Omehia said.

Kidnapping has become common in the restive Niger river delta region, with about 150 foreigners seized so far this year alone. Some are taken by militant gangs demanding political concessions for their oil-rich but deeply impoverished region.

Many, however, are snatched by copycat gangs demanding large cash ransoms, which are frequently skimmed off by corrupt local officials acting as negotiators.

Margaret, whose driver was stabbed as he tried to shield her during the attack, is the third child to be seized in six weeks. The other two victims, both released unharmed after a few days in captivity, were the children of prominent Nigerian families.

On Saturday, Oluchi Hill confirmed that the kidnappers had contacted the family to demand a ransom, but said she feared they did not have enough money. She also said that the kidnappers had demanded that Margaret's father exchange places with her, but that local police had rejected the idea. Previous kidnaps have mostly focussed on foreign men working for large multinational companies, although a Belarussian woman was snatched earlier this year.

It was the first reported abduction of a foreign child in Nigeria's lawless south. A spate of attacks beginning in 2005 prompted many large oil companies to put curfews into place earlier this year and evacuate dependents, but the families of some foreigners married to local women or working for smaller companies stayed in Nigeria.

Most hostages are released unharmed, although two have died in the crossfire between their captors and Nigerian security forces. More than a dozen foreigners are in captivity, including five seized Wednesday from a Royal Dutch Shell oil rig.