A newspaper editor has been charged with making a terrorist threat in an article suggesting Iran would attack Azerbaijan if the ex-Soviet nation supported any U.S. military operations against Tehran. 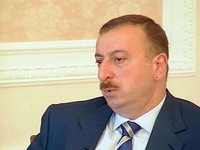 The charges reflected concerns about relations with neighboring Iran in Azerbaijan, a mostly Muslim country whose secular government is cultivating close ties with Washington and contributes troops to the U.S.-led coalition in Iraq.

Eynulla Fatullayev, founder and editor of two independent newspapers that stopped publication this spring amid government pressure, is already serving a 2½ year prison sentence on a libel conviction. Authorities recently charged him with a terrorist threat and inciting ethnic hatred, his lawyer Isakhan Asurov said.

An editor at one of Fatullayev's papers, Sahveled Asurov, said the new charges stem from an article in the other paper, Real Azerbaijan, that listed facilities in Azerbaijan that could face Iranian bomb attacks if the nation were to support U.S. military action in Iran.

The article was titled "The Alievs Go to War" - an apparent reference to President Ilham Aliev.

There is concern in mostly Muslim former Soviet republics that support U.S. military operations in Iraq or Afghanistan over the possibility that the United States could use their territory for an attack on Iran - a constant topic of rumors.

Fatullayev was convicted of libel in April. In May, security agents seized computer hard drives and other materials from his apartment and from the editorial offices of the two newspapers, effectively closing them down, according to editors and lawyers.

The government of Aliev, who took over from his father in a 2003 election denounced by opponents as a sham, has faced persistent criticism over the heavy-handed treatment of independent media.