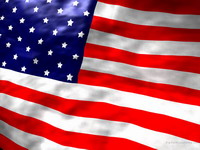 Minnesota has passed the strongest measure, a new law that goes into effect at year's end requiring every American flag sold in state stores to be domestically produced. Violations are punishable by up to 90 days in jail and a $1,000 (735 EUR) fine.

"The biggest honor that you can give the flag is that it be made by American workers in the United States of America," said Minnesota law's sponsor, Democratic state Representative Tom Rukavina, who plans to celebrate his legislative victory by handing out 1,000 miniature flags at Fourth of July parades. "Nothing is more embarrassing to me than a plastic flag made in China. This replica of freedom we so respect should be made in this country."

In Arizona, schools and public colleges were required starting July 1 to put a made-in-the-U.S.A. flag in every classroom from junior high on up. Tennessee requires all U.S. flags bought via state contract to be made here, and similar bills are moving forward in New Jersey and Pennsylvania.

The Fourth of July, or Independence Day, is considered peak season for flag sales, with millions lining parade routes and flying above backyard barbecues.

The U.S. Census bureau estimates that $5.3 million (3.9 million EUR) worth of U.S. flags were imported from other countries in 2006, mostly from China. That figure has been steady over the past few years. The big exception was in 2001, when $51.7 million in U.S. flags were brought into the country, most after the Sept. 11 terrorist attacks.

Sandy Van Leiu, chairman of the Flag Manufacturers Association of America, said the imports are cause for concern, even though U.S. companies still dominate the flag market.

"That door is going to keep opening," said Van Leiu, an executive at Annin & Co., a 160-year-old business that supplies retailers like Wal-Mart. "It starts small, then it gets big. You're just opening Pandora's box."

To help consumers identify the origin of their flags, the association created a certification program two years ago that gives a seal-of-approval logo to flags made with domestic fibers and labor.

Whether Minnesota's law violates international trade agreements - and whether anything would be done about it - is an open question.

Under World Trade Organization standards, the U.S. government cannot treat foreign products less favorably than those produced within its boundaries, said Peter Morici, the former chief economist for the U.S. International Trade Commission. How the rules apply to states is debatable, he said.

Robert Litan, a senior fellow at the Brookings Institution think tank, said the symbolic message is hard to miss.

"It's symptomatic of an anti-foreign bias moving through the country right now. It would not surprise me if other states copied it," Litan said. "It's hard to oppose politically."