Watching the gowns at the Christian Lacroix haute couture show was like seeing fabric sculptures come to life. 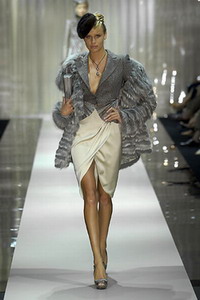 The French designer celebrated his 20th year in business with a sumptuous line-up of outfits that swathed the body in folds of rich velvet or puffs of featherlight chiffon.

The display came on the second day of the autumn-winter haute couture collections, which also featured shows by Givenchy and Chanel.

The setting chosen by Lacroix was almost monastic in its simplicity - a plain white catwalk in a white room at the Palais de Tokyo modern art museum. That left guests free to contemplate lush embroidery and intricate weaves as complex as any work of art.

A midnight blue faille opera cape was fit for a duchess, but one could not help wondering how many duchesses these days are in need of opera coats. Today's customers more often are the newly rich of Eastern Europe and Asia.

"The top 1 percent of the population of the world which are extremely rich are getting much, much richer, and so consequently they have lots more disposable income, and this is how they choose to spend their money," said Glenda Bailey, editor of Harper's Bazaar magazine.

Couture represents the apex of fashion, with made-to-measure gowns costing tens of thousands of dollars (euros). Behind the jet-set lifestyle of private yachts and country estates lies an industry of craftspeople who perpetuate traditions handed down from generation to generation.

And if that is not enough, couture represents beauty for beauty's sake.

"I like it when couture is a bit spectacular and a bit moving," Lacroix told reporters after the show. "I think we need that kind of sharing and exchange of poetic images like these, which can move you even though they are part of the reality of something commercial."

Riccardo Tisci is prone to staging his shows in cavernous warehouses, the better to convey his Gothic sensibility, so his Greek mythology fest for Givenchy came as a surprise.

Though the show notes were filled with references to creatures who "rise from the underworld to roam the earth as merciless instruments of justice," the presentation found the Italian designer in almost giddily light-hearted mode.

Stretch trousers featured shaggy panels of Tibetan lamb on the hips, while a tailcoat in rough-edged tan crocodile was softened with panels of hand-smocked cashmere and a cozy white shearling collar.

Most surprising was the closing line-up of draped white goddess gowns set off by curved bands of silver sequins. Never has Tisci catered so explicitly to the red carpet, and Love was quick to notice.

"Actually, I'm over glitter," the singer told the AP. "Paris went to jail, it's done, that's it. But the last three dresses with the sequins, I was down with it."

Karl Lagerfeld's display for Chanel should have been a moment of escapism in a bucolic setting. Instead, it turned into a logistical fiasco as dozens of taxis clogged up the roads leading to the venue, the park of Saint-Cloud outside Paris.

Guests were still scrambling in under pouring rain when the show started, one hour late, in the estate that has played home to historical figures from Marie-Antoinette to Napoleon Bonaparte.

Under a dripping awning, models swept past in sequined shifts with full sleeves attached to the side of the body like tufted and feathered wings. A dark stain grew on the hem of a shimmering lilac coat as it trailed on the soaking gravel.

Lagerfeld, who never takes off his sunglasses, dubbed the collection "High Profile" in a nod to celebrity guests including singer Fergie from the Black Eyed Peas. Even the bride peered out from a cloud of ostrich feathers wearing dark shades.