A school that suspended a girl for wearing Winnie the Pooh-themed socks has to stop enforcing its strict dress code. 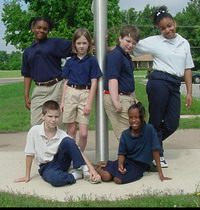 The policy, started in the 1990s to stop gang activity on campus, requires students to wear clothes with solid colors in blue, white, green, yellow, khaki, gray, brown and black. Permitted fabrics are cotton twill, corduroy and chino, but no denim is allowed.

The American Civil Liberties Union filed the lawsuit earlier this year after Toni Kay violated the policy last year by wearing socks with the Tigger cartoon character on them, along with a denim skirt and a brown shirt with pink border. She was sent to an in-school suspension program called Students With Attitude Problems.

The girl's younger sister was cited for wearing a shirt that said "Jesus Freak."

"We're ecstatic that the court recognizes our kids' rights to express themselves at school," said Donnell Scott, the students' mother.

The school district's chief lawyer, Sally Jensen Dutcher, did not immediately return a call for comment.