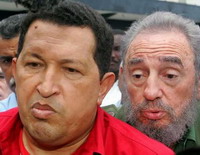 Venezuela has a two-tiered health system in which wealthier, insured patients often can afford prompter, better treatment at private hospitals.

"This is the evil of capitalism," Chavez said of the health care costs at private clinics. "We have to regulate this progressively, transforming the savage capitalist market into a market of solidarity."

Chavez has expanded the public health system, built new clinics and refurbished hospitals, but many public hospitals lack basic medical supplies and sufficient personnel. The Venezuelan leader has also sent thousands of Cuban and Venezuelan doctors to live in poor neighborhoods, where they provide free care.

Following his re-election to a six-year presidential term in December, Chavez embarked on a nationalization drive to impose state control over "strategic" industries in Venezuela.