Turkey's military chief criticized what he said was a lack of international cooperation in combatting Kurdish guerrilla organization. 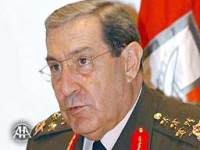 Gen. Yasar Buyukanit made his remarks during a security conference in the Mediterranean resort city of Antalya, a week after he asked the government to set political guidelines for an incursion into northern Iraq to fight Kurdish guerrillas targeting Turkey.

Last week, Buyukanit criticized the United States and Iraq for inaction against the separatist Kurdistan Workers' Party, or PKK, which has escalated attacks on Turkey from neighboring Iraq.

"While we maintain our struggle against this terrorist organization and expect international cooperation in this struggle, we are having difficulty in understanding some positions and attitudes that we face," Buyukanit said Tuesday in Antalya. "These attitudes do not only disappoint us but hurt the basic understanding that combating terrorism requires better cooperation."

The government is likely to consider military action only as a last resort. Asking parliament to approve an incursion would strain ties with Washington and Iraq, which oppose any unilateral Turkish action.

On Tuesday, Deniz Baykal, the leader of Turkey's main opposition party, said he would back any bill authorizing a military cross-border operation into northern Iraq, if the government were to decide to summon parliament from its recess to vote on the issue.

Opposition parties have criticized the government which faces elections later this month for not authorizing an incursion, which they say demonstrates that it has been too soft on terrorism.

Kurdish guerrillas have escalated attacks on the military this year, killing at least 67 soldiers so far. More than 110 rebels were killed in the same period.

Ankara has been battling separatist Kurdish rebels since 1984 in a conflict that has killed tens of thousands of people.

During the 1990s, Turkish troops penetrated Iraqi territory several times, sometimes with as many as 50,000 troops. The Turkish forces withdrew, leaving behind about 2,000 soldiers to monitor rebel activities.