The United States Embassy said the death of a senior diplomat in Cyprus was a "personal tragedy" without any political or security implications. 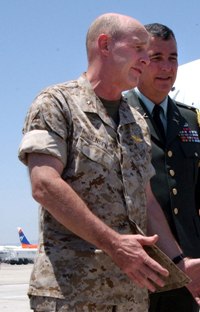 An autopsy showed he had bled to death from a cut to the throat. A Cypriot forensic investigator said the wound was self-inflicted and there was no evidence of foul play.

"At this point in the investigation, it is now clear that Lt. Col. Thomas Mooney's death was a personal tragedy with no political or security implications," an embassy statement said.

The statement thanked Cypriot authorities who had carried out a large-scale search, including checks at ports, airports and checkpoints linking the divided island's Greek and Turkish communities.

Mooney, 45, who was married with children, had served as military attache in Cyprus since June 2006.

Police said Mooney's body was found near his car, which was parked on a dirt road in the Lefka area, about 45 kilometers (28 miles) west of the capital, Nicosia.