Japan's defense minister resigned Tuesday after suggesting the U.S. atomic bombings of Hiroshima and Nagasaki in 1945 were inevitable, a comment that stirred up a storm of criticism in a country where the bombings are seen by many as an unjustified slaughter of civilians. 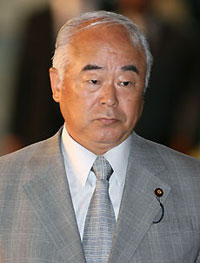 Defense Minister Fumio Kyuma, a native of Nagasaki, said he did not mean to condone the attacks.

"I just meant that there was nothing we could do about it," he said after tendering his resignation to Prime Minister Shinzo Abe, whose administration has been plunging in popularity and faces key parliamentary elections later this month. "I don't think people understood what I meant."

The mayor of Nagasaki was among the most vocal, telling Kyuma to stay away from a ceremony marking the bombing anniversary next month and saying the comment "tramples on the feelings of A-bomb victims."

In a speech on Saturday, Kyuma said the atomic bombings caused great suffering. But he added that Japan would have otherwise kept fighting and ended up losing a greater part of its northern territory to the Soviet Union, which invaded Manchuria on the day Nagasaki was bombed.

"I understand that the bombings ended the war, and I think that it couldn't be helped," he said.

Though Kyuma's statement was similar to the interpretation in the United States that the bombings hastened the war's end and thus saved lives, it contradicted the generally held Japanese stance, fiercely guarded by survivors and their supporters, that the use of nuclear weapons is never acceptable.

A ban on the possession of such weapons is a hallowed tenet of Japan's postwar pacifist policies. Kyuma's remarks were slammed as both a tacit acceptance of the 1945 U.S. decision and of the use of nuclear weapons in general.

"Abe should have said this is outrageous," said Tomoaki Iwai, a political scientist at Nihon University in Tokyo. "The atomic bombings are something that Japanese people can never forgive."

Kyuma's repeated apologies and a stern reprimand from Abe failed to quell the furor.

The opposition had been preparing to submit a formal request for Kyuma's resignation later Tuesday, and opposition leaders claimed Abe shared the blame. Kyuma, who represents Nagasaki in the lower house of Parliament, resigned to minimize the pre-election fallout.

He was replaced by National Security Adviser Yuriko Koike, the first woman to assume the defense portfolio.

Abe himself was the focus of international ire for denying that the government forced "comfort women" to work at front-line brothels during the war, despite historical evidence to the contrary. And a large faction within Abe's party is rallying for a re-evaluation of the Rape of Nanking, in which the Chinese claim as many as 300,000 people were slaughtered.

The atomic bombings are an even more delicate issue.

On Aug. 6, 1945, the U.S. dropped a bomb nicknamed "Little Boy" on Hiroshima, killing at least 140,000 people in the world's first atomic bomb attack. Three days later it dropped another atomic bomb, "Fat Man," on Nagasaki where about 74,000 are estimated to have been killed.

Abe has not made his own position on the bombings public, saying instead that Kyuma "caused misunderstandings" with his remarks.

"Japan wants to continue to be a leader toward nuclear abolishment," she said.

Kyuma was among the most outspoken of Abe's Cabinet ministers.

In January, he raised eyebrows in Washington by calling the U.S. decision to invade Iraq a "mistake" because it was based on the false premise that Saddam Hussein possessed weapons of mass destruction. Japan and the U.S. are close military allies, and Japan hosts some 50,000 American troops under a security treaty.