An Iranian official said the nuclear power plant Russia is building at the southern Iranian port of Bushehr will be completed by September and Iran hopes to start operations shortly thereafter, Russian news agencies reported Tuesday. 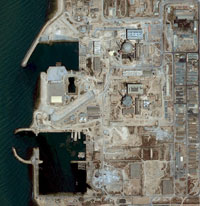 Mohamed Amiri, head of a group of Iranian nuclear and radiation safety agencies, spoke at a scientific conference just outside Moscow, ITAR-Tass and Interfax reported.

The Bushehr nuclear plant - Iran's first - was to have been started up in September, but the US$1 billion project has been hit with repeated delays, most recently in a dispute between Moscow and Tehran over payment.

"Construction (on Bushehr) will be completed in two months and we should receive atomic fuel for the launch of the reactor in accordance with the contract with the Russian side," Amiri was quoted as saying by ITAR-Tass.

Iran "expects the delivery of fuel from Russia for the Bushehr plan at any time," he was quoted as saying.

"At first, Russia wanted this equipment to be made abroad, but then decided to make it in Russia, which led to a delay," he was quoted by Interfax as saying.

Russia's top atomic energy official has said that fuel would be shipped six months before the plant's startup.

The United States and other Western nations have sought to halt the project, saying it could lead to Iran acquiring nuclear weapons.

The U.N. Security Council, meanwhile, has demanded Tehran halt its uranium enrichment program and council members have begun discussing a U.S. proposal for new sanctions because of its refusal to stop.