U.N. judges entered not guilty pleas Tuesday on behalf of a Bosnian Serb general charged with genocide for his alleged involvement in the Srebrenica massacre. 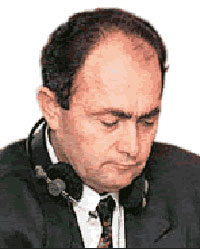 Gen. Zdravko Tolimir appeared at the Yugoslav war crimes tribunal for the second time since his May 31 arrest and again refused to enter pleas to charges including genocide, conspiracy to commit genocide, extermination and murder linked to the slaughter of up to 8,000 men and boys in Srebrenica in 1995.

Tolimir said the court was blocking him from being represented by his own attorney.

"I ask that I be allowed to choose defense counsel according to my own will," he said.

Prosecutors argue that the attorney already is representing another suspect in another case linked to the Srebrenica killings and therefore cannot defend Tolimir as well.

Tolimir also repeated complaints that his arrest at the Serbia-Bosnia border was illegal.

"I was not arrested by regular authorities but by criminal groups ... in cooperation with representatives of this tribunal and SFOR in Bosnia-Herzegovina," Tolimir said, referring to the international stabilization force in Bosnia.

Tolimir, 59, was arrested after a major security sweep of the border region near the town of Ljubovija that included helicopters and anti-terrorist units, Bosnian Serb police said.

Tolimir was a top aide to the tribunal's most-wanted fugitive, former Bosnian Serb military leader Gen. Ratko Mladic and is suspected of helping Mladic evade arrest for more than a decade.

Tolimir's arrest was seen as a sign that Belgrade had finally begun to cooperate with the tribunal, which for years had called on Serbia in vain to help it track down and arrest suspects.

The indictment against Tolimir alleges that, "with an intent to destroy a part of the Bosnian Muslim people as a national, ethnical, or religious group, ... (he) killed members of the group by planned and opportunistic summary executions."

The "large scale systematic murder," the indictment says, began on July 13, 1995, and continued for days until the "entire Muslim population had been either removed or fled" from Srebrenica and the nearby enclave of Zepa by November 1995.

"Over 7,000 Muslim men and boys from Srebrenica had been murdered" by the Bosnian Serb forces, the indictment said.

If convicted by the U.N. court, Tolimir faces a maximum sentence of life imprisonment.

Prosecutors are seeking to join Tolimir's case to that of seven other suspects already on trial charged with involvement in the Srebrenica massacre.