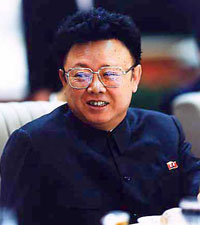 Foreign Minister Yang Jiechi "conveyed the verbal personal message" from Hu to the North's leader, the North's Korean Central News Agency reported. Their meeting went "in a cordial atmosphere," KCNA said, without specifying what were discussed or what Hu's message was about.

Yang has been in Pyongyang since Monday for a three-day visit. He already held talks with the North's foreign minister, Pak Ui Chun, and Prime Minister Kim Yong Il.

Yang's meeting with Kim Jong Il draws attention because the North's reclusive leader rarely meets a foreign guest, and if he does, it could lead to the North's announcement of an important decision.

Last year, China's State Councilor Tang Jiaxuan visited Pyongyang in October after the North's first-ever nuclear test earlier that month. The North announced in late October that it would end its boycott of six-nation talks on its nuclear program.

Yang's visit to Pyongyang comes as North Korea last week vowed to carry out its February pledge to shut down its main nuclear reactor in exchange for economic aid and political concessions.